Since 1994, ‘Australia Day’ has been a public holiday across the country, but this year Dulwich Centre will remain open. As we’ll be working on the day, if you get stuck for something to do you can send us an email or give us a call!

In Australia, the 26th January is a date that means very different things to different people: joy and pride to some, sorrow to others. For some it is associated with the Triple J Hottest 100, cricket and family barbeques. For some, it’s the day they attain Australian citizenship and so has profound significance. While for others, particularly those whose people have lived here for millennia, it is a day of mourning.

Some Australians want to keep the day just as it is. Others want to change the date. Some wonder if it’s a good idea to celebrate a ‘national’ day at all. There’s no other day that brings such diverse responses.

Sometimes when non-Indigenous Australians try to talk with their families about these complexities everyone can end up feeling divided. And in Aboriginal families, it can be a dilemma how to talk about the day with children and what to do together on the day itself.

To spark ideas, we’ve included some background information about 26 January. There are some quirky things about Australia’s history. We learnt quite a few things as we put this together! We’ve also included some ideas from different members of our faculty/team.

Please now click on the tabs on the left.

Background: Why is ‘Australia Day’ on 26th January?

The date 26th of January is currently known as ‘Australia Day’ and is associated with the landing of the ‘First Fleet’ on Gadigal country/Sydney Cove.1

This was not, however, the first fleet of boats to reach what is now known as Australia. Yolngu people from north-east Arnhem Land traded with Macassans (Indonesians) for hundreds if not thousands of years. And other Europeans had met with Aboriginal people before 1778:

Between 1606 and 1770, an estimated 54 European ships from a range of nations made contact.

The ‘First Fleet’ refers to a fleet of 11 ships that left Portsmouth, England, in 1787:

Seventeen convicts died before departure and another 23 died during the eight-month trip. The vast majority had been sentenced to transportation for theft as a response to poverty – some for the theft of a handkerchief.2 It’s hard to imagine what it must have been like for the convicts on the First Fleet. But the hardships experienced by the men and women imprisoned on those ships are not mourned or remembered on our ‘national day’.

Please now click on the tabs on the left.

What actually happened on the 26th January 1788? 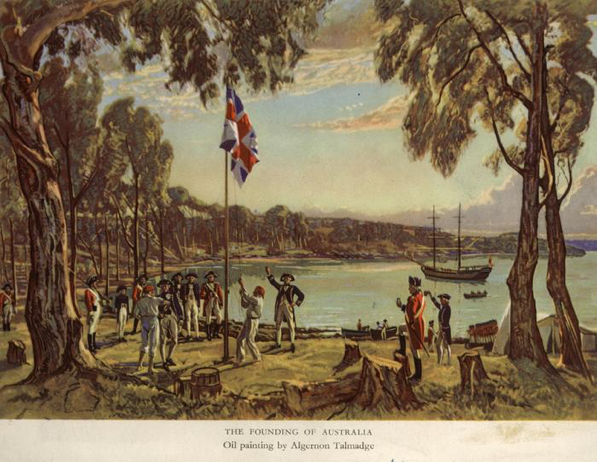 This ‘First Fleet’ arrived at Bunnabi (now also known as Botany Bay) a few days before the 26th January, so our ‘national day’ doesn’t commemorate their arrival. Instead, it commemorates when the Union Jack3 flag was raised to mark the beginning of a British settlement.4

The commemoration of this event hasn’t always been called ‘Australia Day’. Initially it was ‘First Landing Day’ or ‘Foundation Day’ and originally was only recognised in New South Wales. 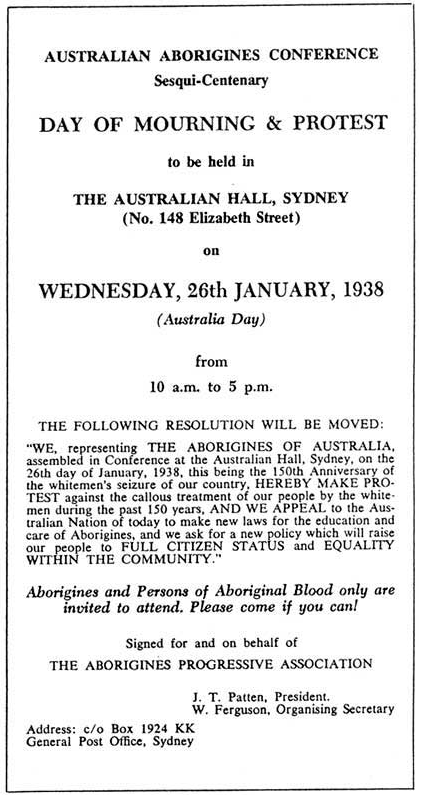 Holding a ‘celebration’ on a day that for Indigenous nations represents invasion/devastation has long been challenged and resisted by Aboriginal people. In 1938, the Aborigines Progressive Association (led by Jack Patten and William Ferguson) and the Australian Aborigines League (led by William Cooper) held a mass civil rights gathering and named it the Day of Mourning:

“In 1888, the centenary of British colonisation, Aboriginal leaders had simply boycotted the Australia Day celebrations. However, this had been ignored by the media … As a result, a more proactive event was planned for the sesquicentenary [in 1938], which the media and governments could not ignore … The day began with a march through the streets of Sydney, which was attended by both Aboriginal people and non-Indigenous supporters … and concluded at the major event on the day, the Day of Mourning Congress, a political meeting for Aboriginal people only … about 1,000 people attended, making it one of the first mass civil rights gatherings … The manifesto opened with a declaration that “This festival of 150 years’ so-called ‘progress’ in Australia commemorates also 150 years of misery and degradation imposed on the original native inhabitants by white invaders of this country” … Day of Mourning protests have been held on Australia Day ever since 1938. However, in recent years, other counter-protests held on 26th January, such as Invasion Day and Survival Day, have been more prominent in Australia.” (Treatyrepublic.net) 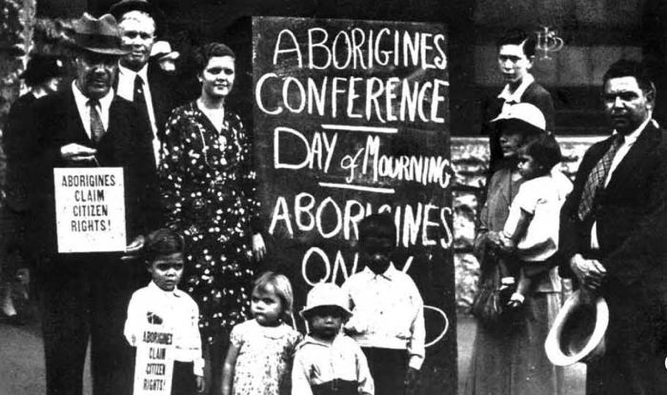 The following video conveys contemporary views of what ‘Australia Day’ means to Aboriginal Australians, 79 years since the first Day of Mourning protests:

Campaigns to change the date

This unsettling of ‘Australia Day’ and the renaming of Invasion Day/Survival Day and/or Day of Mourning has led to a number of campaigns to change the date of Australia’s national day:

Many people have decided to Change it Ourselves

From Fremantle Council which one year took the historic step to create an alternative One Day event on the 28 January.

And even the Gruen Factor (a TV show here in Australia)

Where to from here?

Where to from here?

This brings us to consider what dates along Australia’s storyline we wish to commemorate/celebrate.
We Aussies like our public holidays! There are national public holidays for religious events (Christmas and Easter), for commemorating those lost in wars (ANZAC day), for New Year’s Day, and for Australia Day. But there are also state holidays for the Queen’s Birthday, for horse races, for Labour Day and others, like Picnic Day, we had never heard of until we looked them up!

Here at Dulwich Centre we are a diverse team of non-Indigenous and Aboriginal Australians. We love this country as much as anyone. And we love public holidays as much as anyone. So here are some of our ideas for alternatives/additions:

What about a two-day commemoration/celebration? Sorry Day, the 26th May, which commemorates the Tabling of the Royal Commission on the Stolen Generation, now seems to be taking on a significance that commemorates Aboriginal losses and honours survival. It’s like a continuation of the Day of Mourning. And the 27th May 1967 was when non-Aboriginal Australians voted overwhelmingly (90.77%) for Aboriginal people to be citizens of this country. That’s a date to be proud of. So what about a two-day national holiday – 26 & 27 May? A day of mourning followed by a day of celebration.

How about we celebrate Australia Day on the date the Australian flag was first flown, not the date of the British flag! The current Australian flag was first flown on the 1st of September in Melbourne on Wurundjeri country in 1901. September 1st is actually already called Australian National Flag Day … it’s just that no one knows this. If we made this Australia Day, it could be the weekend of the bye before the finals in the AFL. I reckon that would work well.

I live in Adelaide/Tarndanyangga on Kaurna land. On the 26th January 1788, there were no Europeans anywhere near these lands.5 The South Australian Government is now beginning treaty negotiations with the Aboriginal nations across this state. Local holidays could take place in different parts of the state on the day that the Treaty is signed with the local nation. When the treaty is signed with the Kaurna nation, that day could be honoured here in Adelaide. That really would be a day worthy of celebration.

I’ve only recently learned about the Australia Act which made Australian law independent of British parliaments and courts. This came into force on the 3rd March 1986, so in some ways this date is like an Australian Independence day. At least until Australia becomes a republic! And it’s still hot in early March … so it would work for the barbecues, the beach, beer and the cricket!

There is something significant to me about days of mourning and remembrance. Anzac Day is significant to my family in this way, and will become even more so as it begins to also honour the Frontier Wars’.

What about a holiday on the day that the White Australia Policy formally ended6? Would that be a date commemorating the acts of the Whitlam Government in 1973?’

I wish there was a date on which we would remember the hardships experienced by convicts in this land. What about the 10th of January? This was the date in 1868 that the last convict ship landed in Australia. Rather than celebrating the arrival of the First Fleet, how about we commemorate the lives of all convicts? Perhaps this could be a day when we also focus on the lives of all those currently in Australian prisons and detention centres?

The Aboriginal Flag was first flown at Tarndanyangga/Victoria Square in Adelaide on National Aborigines Day, 12th July 1971. That’s a pretty special date. The Australian Flag and the Aboriginal flag now fly together in the centre of Adelaide. They look fantastic.

Do you reckon eight public holidays about Australian histories would be too much?

As we mentioned before, we are really interested to hear from you about:

On 26 January, you can email us or call us (from 9am–1pm during our regular phone hours). Or leave a comment at the bottom of this page. Thanks! We look forward to hearing from you.

1.For more information about the Gadigal people who are a clan of the Eora nation, see here.

2.To see their names and read what they were convicted of click here – we suggest you read the entry for Thomas Limpus.

3.The first time the Union Jack was raised on this continent was by Lieutenant James Cook on Tuined/Possession Island on August 1770. A quirky fact is that the Union Jack that Lieutenant Cook and Captain Philip raised looked like this: 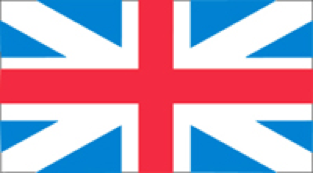 4.  The event on 26th January 1788 on Gadigal land (Sydney Cove) was relatively informal:

A much more formal ceremony and proclamation occurred on the 7th February 1788 (see here). Interestingly, Queen Elizabeth signed the assent of the Australia Act which made Australian law independent of Great Britain on the same date, 7 February, in 1986! That’s one for the trivia buffs!

5. Even after ‘settlement’, South Australia didn’t commemorate the 26th January as it was seen as a date only significant to NSW. It wasn’t until 1910 that it became a holiday in South Australia.