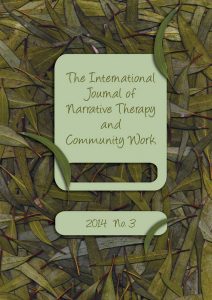 Welcome to the third issue of the International Journal of Narrative Therapy and Community Work for 2014.

We’re delighted with the diversity of the pieces included here! From work with the elderly residents of a Jewish nursing home in Australia; to work with young people using hip-hop in North America and the UK; to innovative narrative couple therapy (with a polyamorous reflection from Austria), there’s something here for just about everyone.

What’s more, we’ve also included an interview about research and power; a paper about narrative group work; reflections from a psychiatrist engaged with narrative therapy; and an invitation to engage with young people through the realm of computer games.

We hope you enjoy the issue! 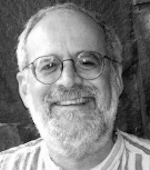 A guest column by David Epston

I (David Epston) am grateful to both Tania Beekmans and Joel Fay for their contributions to this issue of the Journal.

Tania Beekmans graduated from the Bachelors in Social Practice, UNITEC Institute of Technology in Auckland, New Zealand. Since graduating, she has worked at ATWC Family Start from 2006 till 2012. She is currently a Practice Leader at Turuki Health Care – Kotahitanga Family Start. In her work with Kendra, Sam, their daughter Dreia and extended family, she hit upon a very novel way so that the implicit prejudice that was making it impossible for her/Dreia to access public places was turned in to encounters that were encouraging of both her and Dreia. I know of no letter ever written in the context of narrative therapy that has been read by 150 or so readers. I wish I could have been present to see the smiles on shoppers’ faces after reading this letter and the slogans on Dreia’s t-shirt: ‘Oxygen helps my lungs grow – your smile will help me thrive!’

Joel Fay, affectionately and respectfully known as the ‘narrative policeman’, has been long known for the creativity of his practice. His thesis was a remarkable development of narrative inquiry offering police officers the means to debrief a fellow police officer after a critical or subcritical incident in a bar rather than a psychologist’s office (see A Narrative Approach to Critical and Sub-Critical Incident Debriefings). Another co-authored paper by myself, eleven year old Sasha, her untrained puppy, Amber, Joel and his police dog, Isha (see ‘Joel, can you help me to train Amber to be a guard dog?) is a testament to Joel’s creativity. Until his retirement from the San Rafael Police Department, Joel was developing what was referred to as ‘restorative policing’ which was being researched by the State of California. His ‘restorative policing’ was the subject of Public Broadcast Service(PBS) in United States in their Visionaries series. Joel has also been awarded by the American Civil Liberties Union as a ‘man of justice’ and by the California Association of Psychology as ‘humanitarian of the year’. He is currently in private practice and the Clinical Director of the West Coast Post-Trauma Retreat.