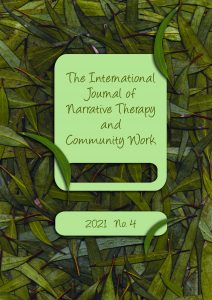 Welcome to this special issue on experiences of war, moral injury and
narrative repair.

It’s a collection that spans many different contexts and realms of suffering.

Part I focuses on the experiences of women and children in war and crisis.

It begins with a paper by Adelite Mukamana from Rwanda. Adelite is a psychologist and survivor of the 1994 genocide against the Tutsi and worked with Ibuka, the national genocide survivor organisation for many years. In this paper, Adelite conveys the double-storied testimonies of young people who were born out of rape during the genocide. It is a powerful and poignant paper that explores the legacies of sexual violence during armed conflict for both women and children. It is followed by a reflection from feminist journalist Jaya Luintel who uses narrative practices with her work with Justice Reporters in Nepal. These are women survivors of sexual violence during the civil conflict in Nepal who now document the stories and skills of other women survivors. Jaya describes the significance and possibilities that Adelite’s work has sparked for her in relation to a Nepalese context. A second reflection on Adelite’s paper is offered by Jewish narrative therapist Ruth Pluznick whose family members were killed during the Holocaust.

Closing this first section is a moving paper by Fariba Ahmadi, an Afghan narrative practitioner who describes the ways she has been responding to Afghan children in Australia in the aftermath of the Taliban claiming Afghanistan. Her skilful use of narrative practice has involved consulting with children, documenting their stories and skills and knowledge and share these with others.

Part II of this special issue focuses on the concept of moral injury and the possibilities of narrative repair and collective action. It begins with a rigorous paper by David Denborough that is a response to three recent events in relation to the Australian military. First, the Brereton Report was launched alerting all Australians to allegations of war crimes committed by our troops in Afghanistan. Second, Australian and US forces left Afghanistan and the world witnessed the Taliban reclaiming control of the country and desperate Afghans seeking safety.

And third, a Royal Commission was announced in relation to Defence and Veteran suicide. Each of these events represent stories of suffering for so many families both Afghan and Australian. This paper seeks to offer practical ways forward for responding to the anguish produced in contexts of war: the anguish of military veterans (and their families), interpreters, human rights workers and civilians. This paper is then followed by three reflections about responding to experiences of war. The first by Victoria Grieve-Williams who is Warraimaay (Aboriginal Australian) and an historian. The second by tyler boudreau who is a former Marine and now adjunct professor at the Smith College School of Social Work. The third by military chaplain Zachary Moon.

The first paper of Part III is by Lauren Caulfield about the Policing Family Violence Storytelling Project – a narrative practice innovation at the nexus of intimate partner violence and state-sanctioned violence, where the harms of family violence intersect with, and are amplified by, the harms of policing. The second, by Kwong Ka Fai, conveys accounts of one-to-one and community work with people affected by the recent violence and political unrest in
Hong Kong.

This collection of papers represents responses to profound hardships in many different contexts. We will very much look forward to hearing your responses.