Over the last decade, Muslim narrative practitioners from Palestine, Australia, Singapore, Turkey and elsewhere have made, and are continuing to make, diverse contributions to the field of narrative therapy and community work. A number of these contributions are described here.

These cards were initiated and created by Sydney based social workers Ola El-Hassan and Lobna Yassine in response to the lack of diversity in resources for young Muslims in Australia. Ola and Lobna felt there was a need to fill this gap, in order to generate useful conversations with young Muslims. 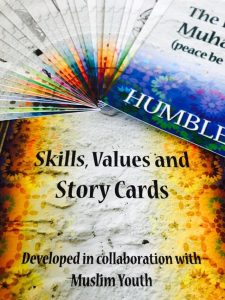 The values and skills included in this pack were a result of asking students in from Birrong Boys High School and Miller Technology High School what was important to them. The students were also asked to assist with the images. They did this with genuineness, thoughtfulness, respect and in a spirit of solidarity. Without them this project would not be possible. The questions accompanying the cards were created with the help and support of friends from all over the world, from Sydney to Turkey to Qatar to Adelaide including Sekneh Beckett, David Denborough, Mehmet Dinc, Nada Eltaiba and Dr Abdul Stanikzai. These cards were produced in partnership with the Dulwich Centre Foundation and Bankstown Youth Development Service. To view a short video of Ola and Lobna explaining how to use these cards see: https://dulwichcentre.com.au/cards/

Khader Rasras is the Executive Director of the Treatment and Rehabilitation Center for Victims of Torture (TRC) based in Ramallah, Palestine. His leadership has seen the TRC team engage with narrative therapy practices since 2004. This led to an initial collection of papers entitled When the trauma is not past or ‘post’: Palestinian perspectives on responding to trauma and torture (International Journal of Narrative Therapy and Community Work, 2005, 3&4, pp. 53-71). Within this collection, Khader Rasras contributed the paper A human rights approach to psychotherapy in which he makes links between healing, psychotherapy and human rights. Khader’s approach (alongside the work of Ibuka: the national genocide association in Rwanda) was a key influence in the development of the (draft) Narrative Therapy Charter of Storytelling Rights.

Tree of Life with young Muslim women in Australia

Lobna Yassine and Ola El-Hassan re-created and adapted the Tree of Life narrative approach for a group of young Muslim women living in Sydney, Australia. Blossomed from these conversations was the nourishing source offered from trees, and from the Islamic faith. Reconciling these two sources led to an uncovering of ‘survival skills’ that the young women draw on to resist the struggles of everyday life. The innovation of women guest speakers from the local Muslim community added to the richness, and power, of these conversations. The Tree of Life opened up a space, and an appreciation for, alternative knowledges, alternative stories, and a stronger sense of community amongst the young women. Lobna and Ola’s work provides a guide for others to adapt the Tree of Life approach for particular communities and spiritual/religious contexts.

The Life Certificate: A tool for grief work

Mohamad Fareez in Singapore has proposed an alternative to the formal, impersonal document of the death certificate – a ‘Life Certificate’, a narrative therapeutic document to honour the lives of lost loved ones. His article, published in International Journal of Narrative Therapy and Community Work, shows examples of the ‘Life Certificate’ used in practice, as well as a six-stage map of narrative practice that can be used in conjunction with it, to help renegotiate people’s relationships with grief. This idea has sparked great interest!

Inviting people In – a ground-breaking alternative to ‘coming out’

Over ten years ago, in collaboration with Muslim young people of diverse sexualities and genders in Sydney, Sekneh Hamoud-Beckett developed an alternative to the ‘coming out’ metaphor which is dominant within white, Western LGBTIQ+ circles. Her highly influential paper, Azima ila Hayati – An invitation in to my life: Narrative conversations about sexual identity, has inspired work in many different countries and contexts. Sekneh is an inaugural Chair of Feminisms, Intersectionality and Narrative Practice at Dulwich Centre and is currently working on a book which focuses on her sparkling narrative family therapy practice with families that include young people of diverse sexualities, genders, cultures and religions. We can’t wait til its published!

Nihaya Abu-Rayyan has developed an innovative narrative approach to support Palestinian ex-prisoners. Her work draws upon imagery from nature’s seasons and elements to create conversations based on a ‘seasons of life’ metaphor. This metaphor enables ex-detainees to trace their journey through the stages of detention, incarceration, and release into society. This approach offers opportunities for ex-detainees to offer double-storied testimonies of their prison experiences and to draw upon the skills and knowledges they used to endure incarceration in order to move forward with their lives. Since its publication in the International Journal of Narrative Therapy and Community Work and presentations at a number of International Narrative Practice conferences, Nihaya’s approach has influenced many narrative practitioners.

Overcoming the ocean of depression project

Dr Abdul Stanikzai initiated this project. While working as an interpreter in Adelaide, he was called upon to translate for medical professionals responding to people from diverse language groups, some of whom had come to Australia seeking asylum and refuge, who were facing mental health crises (and as a result were in psychiatric wards). Dr Stanikzai recognised that mental health staff were struggling to find ways to respond and that it could be significant for those currently in crisis to be able to listen, in their own language, to stories from others who had been through similar experiences and who had managed to ‘overcome the ocean of depression’. Dr Stanikzai mentioned this to Dulwich Centre Foundation and this project is the result.

In this project, asylum seekers and refugees who are now living in Australia generously share their experiences in overcoming hardships in order to reach, support and empower others:

“Country means to us like mother. If you leave your country, it is like leaving your mother, so there is always a vital reason behind that. We left our country based on a life-threatening situation. We were searching and asking for protection. We were chasing peace. We all came to Australia in the last ten years. Some of us came as refugees by plane. Some of us came as asylum seekers by boat. Some of us lived despairing in detention for years before we had a chance to start to make a life in the community. Some of us are still seeking asylum. Some of us have been granted residency, safety and protection. We shall never forget this. All of us wish to be active members of the Australian society in every aspect from work, social life and in making peace. But we have known times of great sorrow, worry, sadness. We want to share with you some of the ways we have survived despair, or depression, or worry. These are our stories, ideas and messages. They are stories from men and from women. From older people and from younger people. If you are drowning, we hope our words reach out to you.”

Audio resources in Arabic, Dari, Pashto, Nepali & Farsi can be found at www.dulwichcentre.com.au/audio

A wide range of young Australians of Muslim backgrounds contributed to this ground-breaking narrative project that took place in the aftermath of the Cronulla Riots. It was one of many initiatives taken in the hope of diminishing racism and anti-Muslim sentiment in this country. Because the Cronulla Riots took place at the beach, we decided to use the metaphor of sharing ‘life-saving tips’ between diverse groups of young Australians. These included young people who were born in Australia and young people who were born overseas. Life-saving tips were  gathered from young people whose families are connected with Lebanon, Turkey, Afghanistan, Pakistan, Bangladesh, Iraq, Indonesia, Syria, Sudan, Bosnia-Herzegovina, Iran, and India. To view 12 video lifesaving tips click here A text version is available here. The following team was involved in this project:  Bill Reda, Zayaan Jappie, Sekneh Hammoud-Beckett, Sherene Idriss, Fatima Mawas Productions, Lobna Yassine, Hassan Alizadeh, Nadia Yacoubi, Sally Khamasieh, Seide Ramadani, Sue Reda, Tim Carroll, Emma Rilstone, David Newman, Gina Whitfield, Susan Lane, David Denborough, Greg Maguire, Mark D’Astoli, Dr Gilbert Caluya, Alejandra Usabiaga, Leticia Uribe and Mark Trudinger. This project was very influential and sparked a number of further projects including:

When trauma is not past: Strengthening stories of survival and resistance

The work of Palestinian narrative practitioners

Palestinian narrative practitioners have consistently questioned the notion of ‘post-traumatic stress disorder’ and have innovated ways of using narrative practices when ‘trauma is not past’. These are described in this handbook from the Treatment and Rehabilitation Center for Victims of Torture (TRC). This handbook, which was published in both Arabic and English, includes skilful and thoughtful examples of practice from Palestinian narrative therapists and consists of four parts. The first describes the broader context of the narrative therapy work of Palestinian counsellors. The second documents a number of key narrative therapy practices and includes examples of Palestinian practice. Part Three conveys how narrative ideas are being used with groups and communities. And Part Four describes how Palestinian counsellors are trying to open possibilities for conversations around very difficult topics. The TRC team includes both Muslim and Christian practitioners.

We try not to take people’s hate into our hearts

One of the most influential narrative collective documents has been created in collaboration with young women from the Muslim Women Association of South Australia in relation to the ways in which they try not to take people’s hate into their hearts when ‘dealing with weird experiences like being stared at, being yelled at by random strangers driving by in their cars, or other strange stuff that happens here and other places’. Their video, which was produced in collaboration with Afghan Youth SA, is being influential in raising awareness and sparking bystander action projects in relation to Islamophobia.

Over the last five years, Mehmet Dinc has been highly influential in introducing narrative therapy and community work in Turkey. A two year program sees graduates innovating their own forms of narrative practice suitable for a Turkish context. You can view a series of Turkish introductory videos by Mehmet here.