Many people have been involved in the development of this program.

We’d like to acknowledge all those who have participated throughout what has been a big journey. In particular, the support, enthusiasm and suggestions of: Deanna McGowan, Beth Smith, Donella Mitchell, Shenara Smith, Corissa Boddington, Zoe Shaw, and Claire McManus. Monica Togo who gave the ‘fruit of the tree’ a deeper meaning, linking present, past and future generations; and the many participants in the various trials and versions of the program. Marion and Jane Cheedy came up with the program’s Yindjibarndi name. Tyson Mowarin of Weeriana Street Media Roebourne and iCampFireTV whose beautiful photos are included on this website.

After participating in a professional development day run by Anne Mead on adapting and utilising the Tree, Karen Hosszu (School Psychologist) asked if this parenting program could be run at the Moorditj Community School. During this trial, further suggestions for improvement were made by Vicki Adams, Maureen Adams, Nadyne Cornwall, Noeleen Penny and Joy Ayton. Roma Winmar, Noongar Elder, dropped in several times to support and encourage and also gave the program its Noongar translation to be used in the South West of the state.

David Denborough from Dulwich Centre was Anne Mead’s supervisor when she was working on the early version of this project as part of the Dulwich Centre One Year Training Program in Narrative Therapy and Community Work. He also discussed and edited this final version with Jasmine and Anne.

About the authors: Anne Mead and Jasmine Mack

Jasmine Mack is a member of both the Ngulama and Yindjibarndi language groups. Ngulama country is coastal land around Karratha/Roebourne. Yindjibarndi country consists of the tableland and ranges inland from Roebourne including Millstream-Chichester National Park. Jasmine first met Anne when working at Roebourne Primary School (where Anne was Principal). The two reconnected when Jasmine was putting her energy into raising her young son and Anne had retired from the Education Department and was working as a psychologist in Roebourne with Yaandina Family Centre. Jasmine was employed part-time to support Anne in program development and delivery. Later, in Perth, Anne and Jas refined this Tree program and trialed it together at the Moorditj Community school. Anne and Jasmine share many hours of discussion and reflection about life in general, education, culture and cultural differences. They can be contacted by e-mail: Jasmine Mack – Anne Mead

This website and the development of the publication ‘Stories of Hope’ was made possible due to the assistance of the Collier Charitable Fund and the Aboriginal Benefits Foundation. Thank you!

Full details of this program, and stories from participants can be found in this publication compiled by Aunty Barbara Wingard ‘Stories of hope for Aboriginal children, families and culture – Narrative responses to a national crisis’ 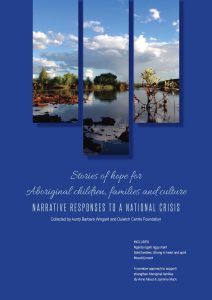 If you would like to know more about the program, please write to us