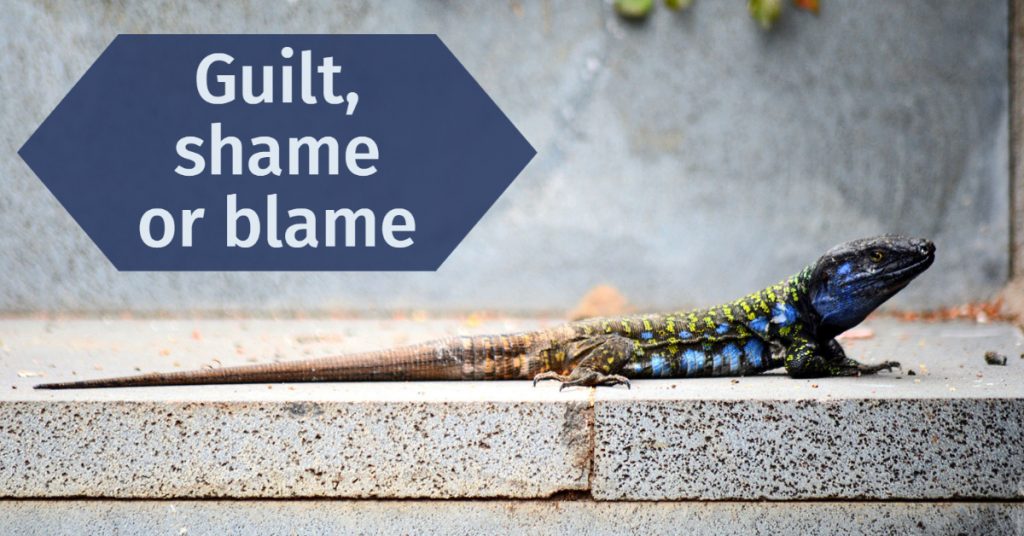 Has guilt, shame or blame visited you or even swamped you in response to your loved one’s suicide?

If so, what effects have these forces had on your life?

I felt I should have been more sensitive to his struggles

Do you find you have to regularly negotiate shame, blame and guilt, or do they only visit occasionally?

Is there anything that makes these forces of guilt, shame or blame less powerful?

Just being open about them when they come up – usually when my sister talks about missing John. She sometimes does that in the context of blaming herself, so we talk about the impact of guilt and shame on our lives and then that opens us up to talking about how we can remain close across the miles.

Blame sometimes enters my life, but I do not feel that it is welcome, as I do not feel that I was intentionally negligent at all, in regard to the gun. To help alleviate the sense of blame, I handed the gun to the police a few years after the suicide.

A friend believed my pain and felt it in her heart

Some people told me it wasn’t my fault, including my mother, but I didn’t believe them because they couldn’t believe my pain through the heart. There was one woman who believed my pain, loss and guilt and she felt it in her heart. When she said it wasn’t my fault, although it didn’t solve the pain, it made the effects of guilt less painful.

He did try and was up against it

When I think about what has helped me not to feel shame, I think of a number of things. Remembering what he was up against in his life helps a lot, especially how unwell he was, that he felt like he was in a black hole, and that he didn’t know how to cope. What also helps me is remembering that my son did try to cope; he did try to help himself. And that it was his decision. Suicide is how he decided to deal with what he was going through, and it was the only way he saw to deal with it. The decision was his – I might have been the last straw, but I’m not the whole reason. I also don’t feel the shame because I think that suicide is not a cowardly thing or a stupid thing, in fact sometimes I feel proud of him because he completed his suicide.

Think about the person he was

There are some things that help make the guilt less powerful. I try to think about the person I’ve lost, rather than think about what he did to take his life. I think about his talent for music such as playing the guitar. I think about his talent with kids, the way he took time to help younger kids by teaching them things like tying their shoelaces or playing music, and the way he helped others who might have been struggling, for example when he was doing his volunteer work. Thinking about what others did for him reminds me of the likeable kid that he was, and this helps lessen the guilt.

Were you visited by regrets, second-guessing, or if-only thinking about the days and weeks and months leading up to your loved one’s suicide?

Is there anything you have learned from these regrets, second-guessing or if-only thinking?

Or anything you have learned about keeping them at bay?