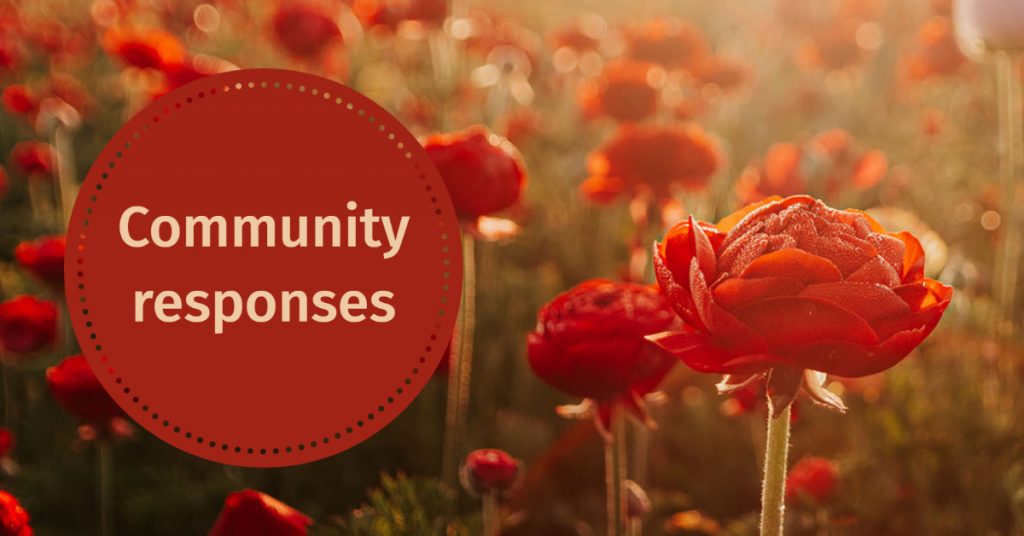 What were the ways that members from your community responded? Are there any particular responses that stand out?

Could you tell a story about that?

What did others do that have made things a little lighter?

Others helping us remember

We were not alone

A plant and a cup of tea

My mother’s friends checked in with me after she died. One day, unexpectedly, her best friend turned up to my flat. I had been hibernating and she brought me a plant. This was symbolic. I held onto the plant and we had tender conversation over a cup of tea. My mum did a lot in the community and was well-respected. Hearing stories of how she had helped so many people gave me the strength on difficult days to keep going.

Were there particular conversations that stand out as more helpful? What was the tone of them?

Collage of love and protection

There was one conversation in particular that my sister and I had about how John had started to realise that his command hallucinations were getting out of control and that he loved his girlfriend and daughter so much and didn’t want to ever see them hurt. When I heard that, it immediately made sense to me what had happened. My sister told me this in the context of preparing for his funeral, and this developed into a discussion of a collage of his life that shows his love for, and protection of, those around him whom he loved.

Is it like you carry forever gratefulness for those who stood with you or those you love during your most anguished times?

How does this gratefulness contribute to those who responded to you or those you love in such a way?

Absolutely. And since it made us all closer, my older siblings now see me as someone who can also be there for them. I am the youngest of 13 but they no longer feel they have to take care of the ‘baby’.

What difference do you think it made to those members of your community who responded? How might it have contributed to their lives?

Many people were surprised at how my sister and I were able to talk things through in depth so early on and appreciated that permission to be open. We just decided that there was no secret about his life that was too dark or scary to talk about. Bringing those times to light helped us all look at his life with more clarity and hope.