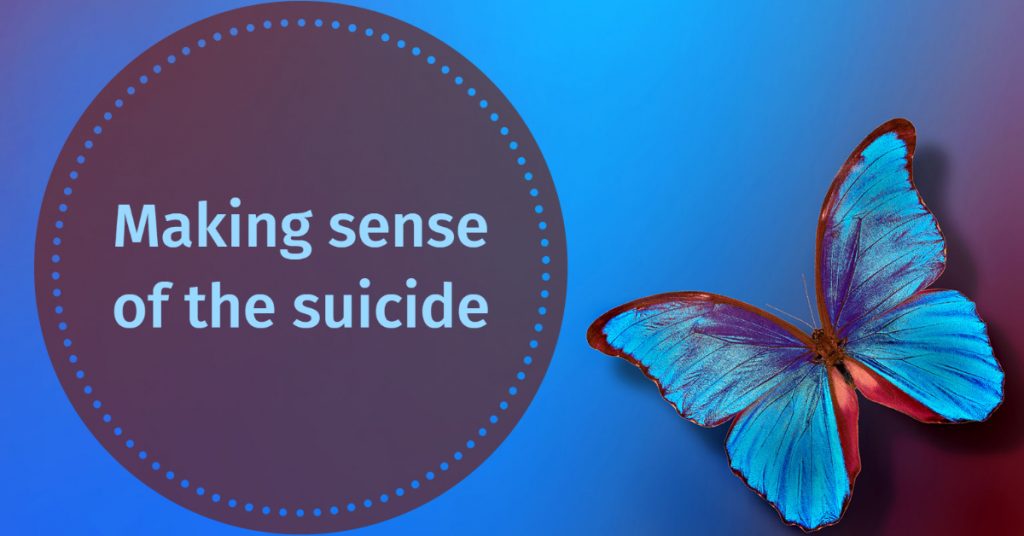 What efforts have you made in trying to make sense of your loved one's suicide? What has that been like?

I’ll catch up with him later…

At first glance, ‘making sense of suicide’ seems to be an oxymoron. I wear seatbelts, I don’t hang glide, and I press the button at crosswalks three times for good measure. So, for someone like me, there isn’t a whole lot of ‘sense’ to be gleaned from deleting all of that for keeps. Yet, all these precautions I take, all the routines I’ve developed to sustain and prolong my life, were taught to me by my father. He taught me how to do push ups and how to take vitamins. He watched basketball and worked hard for a job that he loved. He taught me how to live a good life, and then he killed himself. He committed suicide. I prefer the former. ‘Commit’ has too many legal connotations, although, I do like the word ‘commitment’. ‘An engagement or obligation that restricts freedom of action’ is what it says in my dictionary. I suppose that is how I’ve made sense of it. I don’t like to make it about me. Sure, I wish he had been around longer, but if he couldn’t (which is how it seems to me, he couldn’t) then he has my retroactive blessings to go on ahead. I’ll catch up with him later.

We have had many conversations about all the facets of his life, not just his death. Through those conversations we were able to come to the conclusion that he took his life to protect his family from the voices of paranoid schizophrenia that drove him to violence.

On a personal basis, I wrote, every day for several months. Quite quickly it became a commitment, and the form evolved into a ballad verse form. The commitment was to ‘write three pages each day’. The writing started after the funeral in February of that year and went on daily until my job of that time came to an end five months later. Then suddenly not having to go to work meant the discipline of writing was not needed in order to honour/cope daily. The day itself was available.

Another way of coping was to read. I read history in particular. All this helped to put the death into a more understandable or at least more bearable picture.

Some months after the suicide of my son, Peter, in 1996, I tried to trace his tortuous life that he valiantly led from 1989 when he became ‘anorexic’. I visited the military hospital and private clinics that he attended in attempts to get access to his records. I needed to better understand what kind of life he had lived over this time. The efforts at getting records and the writing turned out to be a way that helped me understand the horrific experiences that he had to deal with, and the kind of demons that had invaded his life.

Have you found yourself reviewing the person's life? Have you at times felt that the person's suicide was understandable, that it just doesn't make any sense or somewhere in between?

I have had no urge to ‘review’ my daughter’s life in that sense but I have had a strong urge to maintain a connection. To honour my memories with her. I feel the suicide was understandable, although an immense shock. She had become quite ill as a result of upsets to her body chemistry as a result of her eating disorder.

Yes, I have spent a lot of time reviewing Peter’s life – living in the past with him; enjoying the happy times together, the successes that he achieved; trying to understand what I had not understood when he was growing up; being proud of him as a person; being proud of his relationships he had with a wide group of friends; being proud of his fantastic sporting successes and his academic achievements. All this did not make his suicide understandable. My research, contemplations and writings about his life from 1988 till his death, gave me some understanding what life for him could then have turned into and had been like. That gave me some indication of the demons in his life.

Have there been certain ways of making sense of the person’s suicide that have made the path more difficult or brought more turmoil for you or those you care about?

No-one’s life can be described in one sentence

In my case, the county coroner’s office ruled the death a suicide. Apparently he was distraught over marital problems. This is what the coroner released to the press. How he came to this conclusion was by reading the suicide note written to me. This is how my husband’s full life is scripted; it ends with one sentence distraught over marriage problems. And this one sentence version was very unhelpful for me. No-one’s life can be described in one sentence.

One of the things that made it much more difficult was, generally, nobody wanting to talk to me about it. Not one of my partners’ family have spoken to me about it. What struck me very much over time was the way that people avoided me as if they could see death in my eyes, and also avoided speaking about my son’s life and death. In fact, the psychiatrist whom I consulted soon after the suicide, also could not/would not ‘go there’, even when I brought to a session my son’s suicide note for him to read. He read it, folded it up, handed it back to me, and sat and looked at me, for, what seemed like ages. He never referred to the suicide then, or later.

Having no-one to talk to

Without doubt, the path that made things difficult for me was having no-one to talk to, no-one understanding that I had big trauma, emotional upset and grief deeply hidden within. I easily and readily told people that my dad had died from suicide, but didn’t feel much. I felt like I understood his death, given his personal circumstances and his own grief, and perhaps I was quite matter-of-fact about it. It’s only in the last few years that I’ve had the curiosity to meet a couple of distant relatives and find out more about my dad, and felt the pain and confusion. As is often the way, I now wish I had asked my dad more about himself and his life when he was alive.

My son was told to see the school counsellor without my permission and the counsellor told my son that it was a cowardice act and selfish. My son said at the time it was not helpful and these words only caused pain. My son said he felt like she was trying to teach him that suicide wasn’t the right choice. That was obvious to him!

Have there been certain ways of making sense of the person’s suicide that have made the path easier for you or those you care about?

My children and I find that remembering his best intentions is the most helpful. It has been eight years since my husband passed and there is not a day that goes by that he is not mentioned or thought about in some way. My son just graduated from high school and we all sat down and thought about how proud their father would have been. My children remember times he spent with them: taking them to chess tournaments, swimming in the pool, reading at night time, making funny voices, watching sports, drawing, and cooking. They can remember how much he loved them and how he would cry when they made a hoop in basketball. These precious memories make the children’s path easier, as we can hold onto love and not get lost in the path of despair. There are sad days but these stories help us to keep going.

A book of memories

One father I knew created a memories book for his daughter. He included stories people had written on Facebook, happy memories, photos, things he would like to share one day. This was an ongoing project.

What did you find helpful in piecing together the person’s life? Did you ever have the sense that you were putting things back together, or has it been quite different?

The day I heard the gun shot it was like my life shattered into a million pieces. It has felt like I am putting so much back together, even how I think and focus on tasks. Piecing together my husband’s life was crucial to my coming out of the shadows. I started with talking to his father. He recounted how my husband had been a loner as a child and would pretend to play in coffins: and he had tremendous focus as a child in his writing, photography, and even building boats. This helped me not blame myself. There were seeds before me of his complex relationship to life and death. Reviewing my husband’s life and our family life helped me have appreciation for all that we had, and what an effort my husband had made at living when it was never easy for him. Life for him had been a battle. I felt proud that he had tried so hard and for so long for us to be the best that he could be.

If you are need of assistance:

If you are currently struggling with suicidal thoughts, please seek assistance. If you are within Australia, please refer to the following support services. If you or someone near you is in immediate danger Call Emergency Services on 000; or Go to a hospital emergency department.

If you are outside Australia, you can find helplines in different countries here: findahelpline.com